Registrations to Cinema Academy of Hassan b. Sabit Started

The 2018 year registration to Cinema Academy of Hassan b. Sabit has started, the academy is a part of project started by  Siyer Foundation in the field of cinema

Our foundation is amed to open new horizons with different perspective to the cinema world with the new content of Hassan b. Sabit Academy. This year besides workshops at 3 different areas and various activities we are going to enrich the program by shooting  5 different short films.

Why Hassan b. Sabit?

Today, the media and cinema are the most important communication tools used to influence people, fulfill the function of poetry and oratories from the period of Cihiriye and Asr-i Saadet. Hassan b. Sabit (ra)  is one of the most important representatives of this field, Hz. Prophet’s (pbuh) skillful poet. Therefore today’s directors, producers, screenwriters and, of course, actors at the same time are playing the role of Hassan b. Sabit.

Siyer Foundation using cinema with the project of Hassan b. Sabit Cinema Academy every year gives efforts to bring eternal messages of Muhammad (pbuh) in The Qur’an and the Sunnah, to the minds of the people processing and living in this century during playing the role of Hassan b. Sabit, with the target of being able to raise a generation that plays, launched in its muallimlig.

In the Scriptwriting Workshop of Yektacan Özçift groups of participants are going to prepare scenario preparation.

Participants will take important steps in becoming the future directors as well as taking the scenes prepared at the screenplay workshop and gain experience on the field in the instructional workshop under the guidance of Abdülhamit Guler.

The participants will learn the subtleties of editing and assembly under the guidance of İbrahim Demiray within the scope of the training to be done in Editing and Assembly Workshop, they will do their editing and montage of the short films shot within the Academy.

Seven separate film readings from the famous world scenarists made by 5 valuable cinema critics, screenwriters, producers and directors, will be realized within the scope of program of Hassan b. Sabit Cinema Academy. 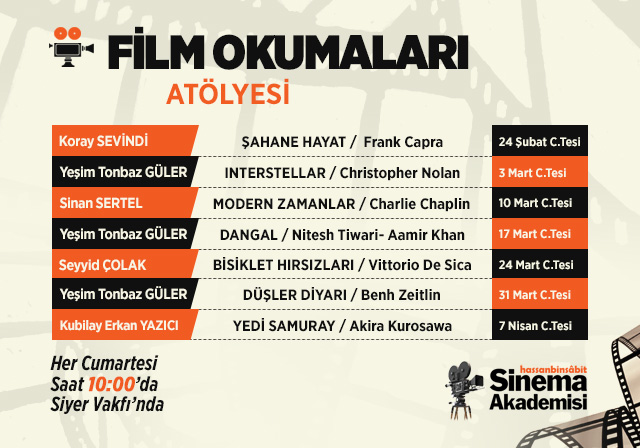 In the interviews to be held, we will host 5 important masters in the field of art and cinema within the Cinema Academy.

Siyer Foundation, without any charge, will continue registration at Hassan b. Sabit Cinema Academy until February 21, 2018.

Programs are limited to quotas.  The records to be taken to the Cinema Academy will be determined by pre-registration via web site alemlererahmetfilm.com and interviews to be held on February 22nd and February 23rd.

Participants will lose their right to participate in the application programs and receive certificates if they are excused by more than 1 Absence.