The year 1435 (Gregorian Calendar, November 4, 2013 – October 25, 2014) according to the Hegira calendar was declared as the “SIYER YEAR” in the spring of 2013 as a result of a decision by our Siyer Foundation that has been continuing its activities with increasing excitement since its foundation in 2010. In this regard, many academic, cultural and artistic activities were organized for ensuring that our Master Prophet (pbuh) sent as “Mercy to the Universe” is known properly both by the people of our country and at an international scale, His rightful cause that He pursued until His last breath and that His ideas that shed light to humanity are understood in depth, loved and respected dearly.

One of these academic, cultural and artistic organizations carried out by our Siyer Foundation during the year 1435 according to the Hegira calendar was “MERCY TO THE UNIVERSE, NATIONAL SHORT FILM COMPETITION”.

A total of 50 works participated in the short film competition that started on January 1st, 2014 and an Award Ceremony and a Gala Night was organized on October 26, 2014 at the Fatih Ali Emiri Efendi Center of Culture.

The films that received a ranking were presented their awards during the ceremony which was 20,000 TL in total. The competition that was a first among all Short Film competitions due to the fact that its subject of focus was the messages of our Master Prophet (pbuh) generating a different kind of excitement with high participation.

The 1st year award ceremony took place at the Fatih Ali Emiri Efendi Center of Culture. Muhammed Emin Yıldırım Hoca participated in the ceremony and made a speech: “In order for us to take as examples our Master Prophet (pbuh( and His Companions educated by Him, we have to use a language that suits our day and age. Cinema is one of the most important forms of media for this purpose.” He also stated that the competition should be named as “Muslim Community” instead of “National” emphasizing the importance of cinema for all Muslims.

While the preliminary jury eliminated the films following a 10 month process organized by the Siyer Foundation, the grand jury determined the finalists and their rakings among the 50 finalists with the same intensity and sensitivity.

There were important names in the short film competition jury. These were as such:

A total of 50 works participated in the ‘’MERCY TO THE UNIVERSE’’ short film competition. Awards were presented to the films that received a ranking.

The 1st Honorable Mention Award was given in the name of the late Director Yücel ÇAKMAKLI to Bünyamin DURANOĞLU for the film entitled “DEĞİRMEN”. Duranoğlu’s award was presented by Ekrem Şahin, Albarakatürk Corporate Communication Manager.

The 2nd Honorable Mention Award was given in the name of Hassan b.SABİT, poet of Prophet Mohammad (pbuh) to Kevser CANBAL – Harun Reşit CANBAL for the film entitled ‘’BEN OLMASAM, O OLSA…”. Canbal received the award from actor Yaşar Alptekin.

Jury Special Award was given in the name of the Martyr Director Mustafa AKKAD to Zahit Ali KİLİT for the film entitled ‘’KIRINTI’’. Kilit received his award from İhsan Kabil, grand jury president and film critique.

Siyer Foundation Special Award was given to Mehdi Encü who participated from Şırnak/Uludere Roboski Village with the film entitled ‘’Cennete Yolculuk’’. The award was presented to Encü by our Siyer Foundation President Mehmet Kaya.

Third place award was given to Seyid ÇOLAK for the film entitled ‘’SERENDER’’. Çolak received his award from Sefa Önal who has directed hundreds of films and TV series.

The second place award was given to Bülent ŞAHİN for the film entitled ‘’KARANLIĞA DOĞMAK’’. Şahin’s award was presented by Türk Media Chairman of the Executive Board Ethem Sancak. Ethem Sancak stated his satisfaction regarding the organization and promised to give an award of 10.000 TL to all participants in order to further popularize the works in this field.

The first place award was given to Orhan DEDE for the film entitled ‘’EV’’. Dede’s award was presented by Muhammed Emin Yıldırım Hoca.  Afterwards, a souvenir photo was taken with all finalists, jury members and other participants thus ending the award ceremony. 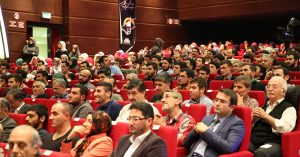 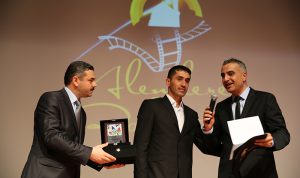 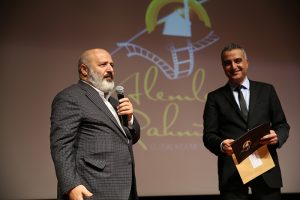 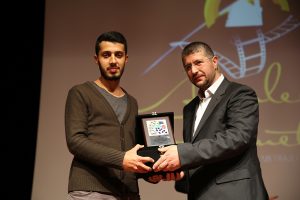 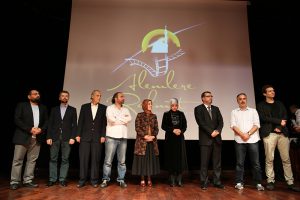