Mercy to the Universe Short Film competition organized for the 3rd time by the Siyer Foundation which has become a traditional event dedicated to the Master Prophet (pbuh) for the first time in the world and in Turkey gained an international identity during its 3rd year.

An international jury was formed for the Mercy to the Universe International Short Film Competition.

Deadline for the participation to the competition applied by directors from many different countries was December 31, 2017. A total of 143 films participated in the competition which continues to raise the bar due to the ever increasing interest. The main jury selected the rankings from among the first 15 finalists during the two-stage evaluation.

Mercy to the Universe International Short Film Competition organized different activities and cinema talks prior to the gala and award ceremonies this year thus bringing together the lovers of cinema with the international jury members.

Cinema Talks started on February 15, 2017.The speech on, “Spiritual Dimension in Turkish Cinema” was moderated by cinema author İhsan Kabil. Hocakulu Narlıyev and Firdevs Azizi were among the guest names in this conversation.

The talk entitled, “Cinema as an Art of Telling Stories” took place on February 15, 2017 with the moderation of Art Critique Bedir Acar. Director Nazif Tunç, Academician Artist Mustafa Demirci and scriptwriter Elif Eda Karagöz were guests of this talk.

A talk on, “Cinematic Representation of our Understanding of Civilization” took place on February 16, Thursday with the moderation of director and cinema author Abdulhamit Güler. Nacer Khemir participated as a speaker.

On the night of the same day (February 16Thursday) newspaper reporter Bünyamin Yılmaz moderated the talk on, “Cinematic Reflection of Moral Values”. Gülcan Tezcan was the guest of this talk.

AWARDS WERE PRESENTED AT THE HALİÇ CONGRESS CENTER

The award ceremony for the 3rd Mercy to the Universe International Short Film Competition took place at the Haliç Congress Center. The program that was broadcast via many national and international television channels was watched live by millions of people.

Many names from the world of art, cinema and politics participated in the award ceremony. Siyer Foundation President Mehmet Kaya participated in the ceremony and made an opening speech in which he gave information on works carried out by the foundation. Kaya explained the purpose and goals of the Mercy to the Universe Short Film competition after which he continued his words as such:

“We set out fully aware that we have to tell of our Master Prophet (pbuh) and His distinguished companions to the people of our age and that cinema is one of the most important tools available for this purpose today.”

“The Qur’an tells a lot with so little.”

Siyer Foundation founder Muhammed Emin Yıldırım participated in the ceremony as well and spoke as such:

“The most important sunnah that Muslims should abide by is to give the proper due to their work. If we are to take word, then we have to give due to whatever we do.

If you ask whether what we have done for the past 3 years is sufficient or not, I would of course say that it is not sufficient and that we have just started on this path. Cinema is a very difficult field. But if the Muslim community needs a mad man, than we accepted being that mad man.

We signed up for this madness if the name of the Messenger of Allah (pbuh) will move from geography to geography and from nations to tribes.

Actions have seaons just like climates do. This community has been expressing many things for the past 250 years, however it fails to reflect the messages of Islam properly. Someone should work and do justice to the flag of Islam. The same holds for cinema as well as literature, science and all other disciplines.”

Minister of Culture and Tourism Nabi Avcı made a speech during the ceremony in which he indicated that, “The Mercy to the Universe International Short Film Competition has reached a very important point”.

Avcı also added that he is aware of the difficulties involved in such comepetitions and congratulated the jury members for bearing such a heavy load.

Avcı suggested the book “Yeşilçam Günlüğü” by Ayşe Şasa to the young generation and said, “Our Master describes the miraculousness of His descendance upon the world as completing good morals as such, ‘I have been sent to complete good morals’. Thus, we are of the opinion that this competition which has been organized for the past 3 years by the Siyer Foundation that encourages the making of films that will enable us to understand the exemplary morals of our Master, His sound personality, His life of struggle which will result in an increase in the awareness of people is of great importance. Therefore, I as the representative of the Ministry of Culture and Tourism wish great success to all my young friends with the principle of, ‘good intent, good future’.

Following his speech, a plaque was presented to the Minister of Culture and Tourism Avcı by Siyer Foundation President Mehmet Kaya.

Jury president Hocakulu Narlıyev was called onto the stage for his welcoming speech on behalf of the jury. Narlıyev’s (Turkmenistan) plaque was presented by İhsan Kabil after his speech.

The guest of honor of this year’s competition was the famous director Mustafa Akkad who never let his ideals shadow his Muslim identity.

“Mustafa Akkad’s goal was not making money through films or entertaining the people in front of the curtain. His goal was to use cinema as a sword or as cavalry and through his efforts many people became Muslim. I have never seen any other people who commemorate Mustafa Akkad every year and who make a program in his memory; that is why I thank yo dearly,” said Abdulkerim Akkad who received his plaque for his participation from Ali Rıza Demircan.

Directors of 15 short film finalists from different countries of the world were invited up to the stage where they received their plaques.

The film enttled “Yalnızlık” by the Kırgız director Kasiet Djholdoshbekova which depicts the most fundamental emotion for making the world a better place; benevolence and compassion with an effective and permanent visuality was awarded the first place this year. Djholdoshbekova received the award from Siyer Foundation founder Muhammed Emin Yıldırım.

The awards given to films that received a ranking were as such: 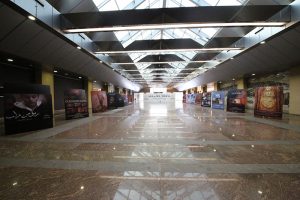 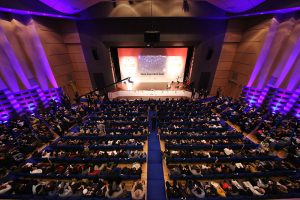 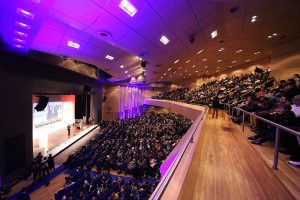 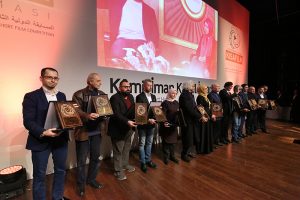 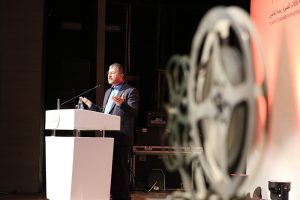 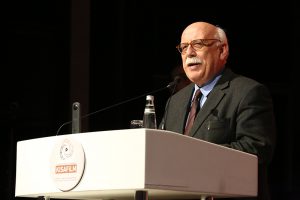 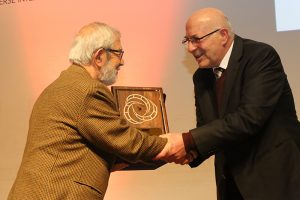 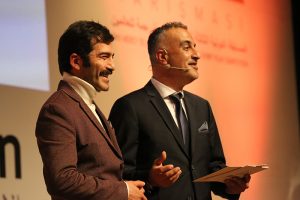 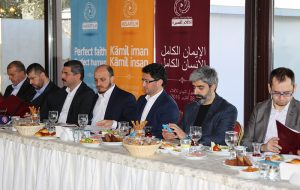 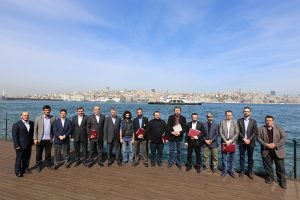 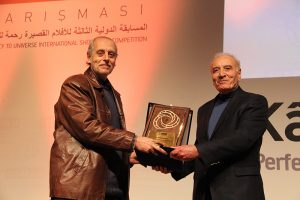